A Brief History of Sepak Takraw

Sepak (“kick” in Malay) and Takraw (“ball” in Thai) was created by the royal family of Malaysia  about 500 years ago.

It looks very similar to the Japanese traditional game, “Kemari” where the players form a loose circle and the number of times the ball is kicked before it touches the ground is counted. In 1965, the game was unified into the present volleyball/tennis style with the addition of a net and the adoption of international rules. 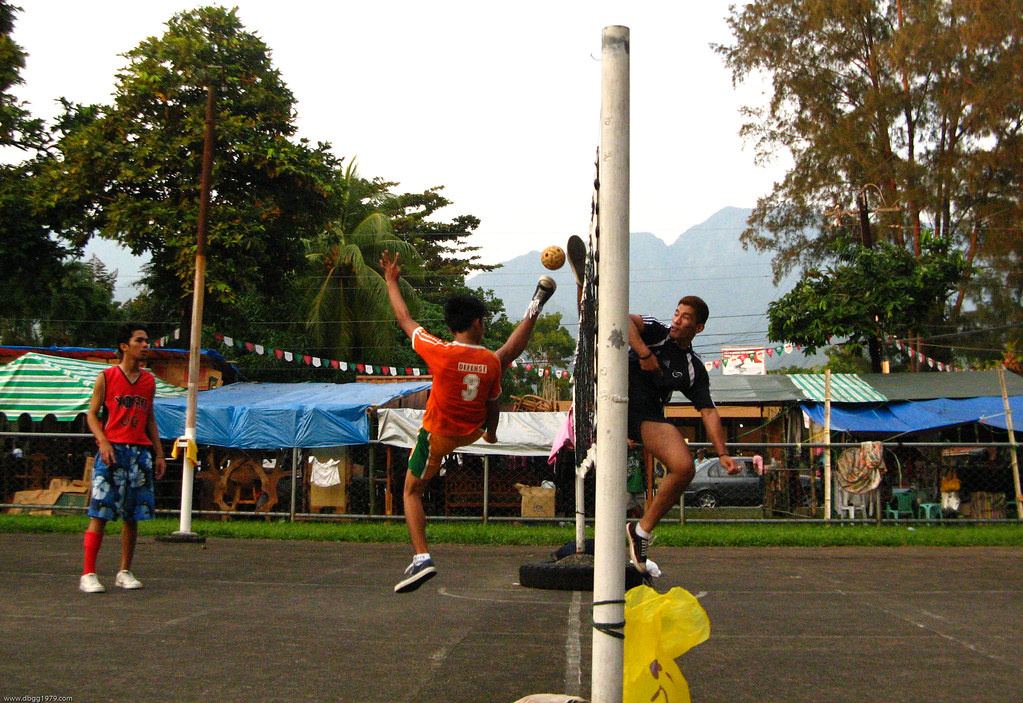 It is a team game involving three players per side and the object is to volley the ball over the net into the opponents court using any part of the body except the hands or arms. Each team is allowed three contacts with the ball to get it over the net.

Unlike the similar game concept of volleyball, in Takraw, a player may take more than one contact consecutively. Points are scored by the serving team, and points are gained if the opposing side fails to return the ball over the net, or a winning shot is played whereby the ball lands in the opponents court.

The length of the game varies – there is no time limit. Matches are won by winning 2 out of 3 sets. To win a set, one team must reach 15 points. Nr extra points are played – the set is played straight and the first team to reach 15 points wins the set. The third set, if necessary is played to only 6 points and is referred to as a “tie-breaker”.

The court and the net height and size are identical to those used in badminton and each team has three players. The rules are very similar to those in volleyball, with the following exceptions:

The use of hands is not permitted.

Each player may touch the ball more than once before it is kicked over the net to a maximum of 3 total per side per volley.

There is no rotation in the defense position.

It becomes a score (net in) even if the ball touches the net before falling into the companion court.

The player who kicks a serve surely puts a leg (shaft foot) in the service circle, and takes a toss from the player who went into the quoter circle (the semicircle of a radius 90 cm done around the contact point of the center line and the sideline), and kicks the ball.

When a game begins by one serve, a ball can be touched by the attack of one time to three times. You can use a head, a back, legs, and anywhere except for the arm from the shoulder to the point of the finger.

Note: A serve hitting the net on the serve is “good”.

All Sepak Takraw courts are standard in size and are about equal in size to badminton court. Takraw may be played indoors or out, although most major tournaments outside of the USA are played indoors.

The playing surface must be flat, horizontal and uniform. The width of the lines bounding the court should be 0.04m measured and drawn inwards from the edge of the court measurements.

Court boarders should be at least 10.0 feet (3.0m) away from all obstacles.

Center Line: The Center line of 1 PI inches should be drawn equally dividing the right and left court.

Quarter Circles: A corner of each center line, a quarter circle shall be drawn from the side line to the center line with a radius of 3.0 feet measured and drawn outwards from the edge of the 3.0 foot radius.

Height of the Posts: ISTAF regulations call for the posts to be 5’4″. You can use the portable volleyball posts and secure the net to the desired 5″1″ height.

Free Area: An area of 6 feet outside the court boundaries should be free of obstacles.

Block: Blocking is a defensive skill used to counter a spike coming from close to the net. Block is usually made by jumping in the air and raising a leg and/or back to divert the ball back into the opponents court. A block counts as one contact.

Center Line: Divides the length of the playing court into two equal halves.

Dig: The act of fielding hard hit ball successfully, usually a spike or block, to regain control.
i.e. The Dig by Thailand came at crucial point in the game..

Dink: A soft hit ball -usually either a “dink serve” or a “dink spike” Fault: A violation of one of the rules of the game.

Feeder: Person who “sets” the ball to the “spiker”.

First Ball: Term used to describe receiving the serve by the opposing team.

Quarter Circle: Place on court where the serving team’s forwards (left inside and right inside
players) must remain until the ball has been kicked by the server or back player.

Roll Spike: Spike in which the player jumps with his back to the net, rotates in the air and
kicks the ball over the opposite shoulder from the kicking foot with a flip like motion. Th most dramatic and famous move in the game!

Service Over: When the serving team fails to return the ball over the net or commits a fault
or foul. The opposing team becomes the serving team but a point is not awarded to either
team. USA also uses the same term as volleyball – “Side Out”.

Serving Circle: Circle of 1 foot radius located in both halves of the court. The server is
required to have one foot touching the ground inside the serving circle during a serve.

Set (1): A period of play which is concluded when one team reaches 15 points. Matches
consists of the best of three sets.

Set (2): A high pass by one player to a team-mate or to self to enable a spike.

Service: The act of putting the ball into play by the back player.

Service (Hand) Toss: A hand throw of the ball by one of the forward “inside” players to the
“back” who must kick the ball into play in one try.

Spike: A powerfully hit shot directed into the opponents half of the court by the foot or head.

Sunback Spike: Spike in which the player jumps with his back to the net and kicks the ball
over the same shoulder as the kicking foot. In soccer this is known as a “bicycle kick” or
“bike” for short.